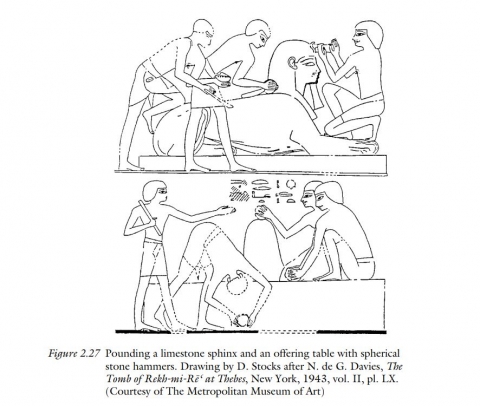 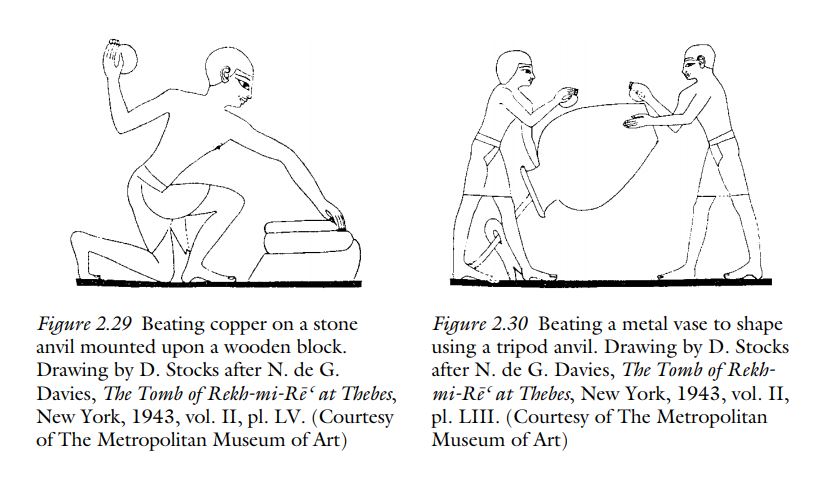 Experiments in Egyptian Archaeology: Stoneworking Technology in Ancient Egypt
43. In Dynastic tomb scenes, workers are depicted using hand-held stone hammers (Figure 2.27).73 (Normally, wooden handles were never fitted to stone tools, except for picks, mauls and large pounders – see Chapter 3.) The craftworker must have possessed an extensive collection of hard stone hammers, which were of different sizes and shapes, to cope with differing metal types, such as copper, bronze, gold and silver. The illustrations in the tomb of Rekhmire show stone hammers to be spherical or hemispherical. Sometimes, the craftworker is using the flat side of the stone hemisphere, sometimes the curved surface. It might be expected that a worker’s hand and wrist were jolted with each blow of the hammer, which, after many blows, would cause injury and pain. Experimentally beating copper and bronze artifacts into shape (Figure 2.28), particularly chisels, demonstrated that ancient coppersmiths probably suffered some form of repetitive strain injury.

44. An illustration in the tomb of Rekhmire74 depicts a cast plate being thinned upon a smooth stone anvil mounted upon a wooden block, its base buried in the earth (Figure 2.29). A spherical stone hammer is shown for the initial beating of the metal, although gold and silver are actually being worked in the tomb scene, not copper. Metalworkers also used spherical and hemispherical hand-held stone hammers for beating metal vessels to shape, which were placed upside down on a tripod anvil, seen in illustrations in the Eighteenth Dynasty tomb of Rekhmire at Thebes (Figure 2.30).75 (Possibly, stone vessels were also mounted upon the anvil for smoothing their exteriors with stone rubbers.) Craftworkers are depicted beating metal vases with the flat side of a hemispherical hammer, as well as its curved surface.