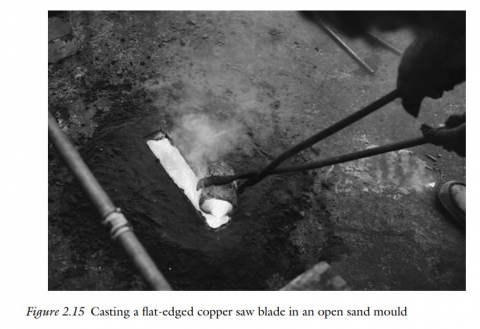 Experiments in Egyptian Archaeology: Stoneworking Technology in Ancient Egypt
31. Two other cutting edges deserving a high ranking in the pecking order of craftworkers’ implements are serrated and flat-edged copper saws (see Figure 2.1). It is important that a distinction between saws with and without serrations is made at this stage. The earliest located serrated saws for cutting wood, and possibly for cutting soft stone, date to the Third Dynasty;23 in addition to a model saw from this dynasty, a notched copper saw was found at Meidum.24 It is likely, however, that the serrated saw originated even earlier than the First Dynasty, when it was employed for sawing wood for coffins. Saws were sometimes hammered with tangs, for fitting curved wooden handles, although in at least one Fifth Dynasty saw the handle was hammered from the same sheet of copper forming the blade.25 The crudest saw was a blade notched by chopping it on a sharp object.26 Other serrations may have been produced by sharp-edged sandstone rubbers. The technology for producing thin-bladed saws is linked to the casting of copper plates directly into open sand or pottery moulds and hammering the cooled casting into thinner sheets.

32. Evidence for the flat-edged copper saw for cutting hard stone is connected, in part, with slots and saw marks found on stone sarcophagi and other stone objects. For example, the Third Dynasty calcite sarcophagus of Sekhemkhet and the Fourth Dynasty rose granite sarcophagus of Khufu were sawn to shape.27 Some slots have been connected by archaeological evidence to the use of copper,28 but recent experiments with hard stone29 have incontrovertibly shown that serrated copper, bronze, or indeed iron and steel, saws could not possibly have cut such an unyielding material. A fuller appraisal of the flat-edged saw type, and its working method, will be discussed in Chapter 4, but all that needs to be said at present is that the casting of a plate of copper in an open mould was also utilized for manufacturing flat-edged, stonecutting saws, in addition to serrated woodcutting saws.