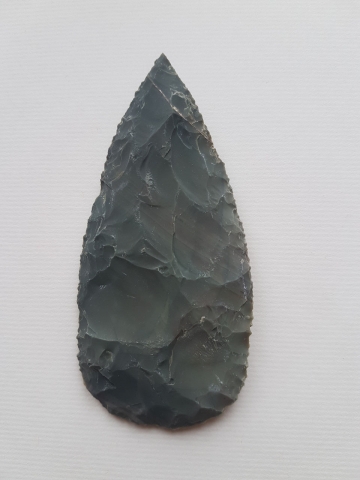 Experiments in Egyptian Archaeology: Stoneworking Technology in Ancient Egypt
The title of this chapter indicates that flint, as a tool material, occupies centre stage. Although many Predynastic and Dynastic tools were made from true flint (Mohs 7), other tools were made from chert (Mohs 7).1 Chert, or hornstone as it is sometimes called, is an impure type of flint and often mistaken for true flint; flint and chert are more fully described in the following section. In order to avoid confusion and unnecessary repetition in this chapter, the tools made from flint and chert nodules will be referred to as ‘flint’: flint and chert tools are capable of performing similar cutting operations upon most materials.2

80. In association with large-scale limestone working at Giza, Petrie29 found flints in rubbish tips near to the Great Pyramid. He noted that the masons’ waste chippings were disposed of by throwing them over the cliffs situated to the north and to the south of the Great Pyramid. These rubbish tips were made up of layers of large chippings, fine dust and sweepings, and layers of flints and sand, indicating that a piece of desert ground had been cleared in order to increase the space for working. It is possible that these flints were produced by knapping the tools from nodules at the building site, the tools having been required for preliminary rough work on the pyramid’s limestone and interior granite blocks.

80. If indeed this was the case, the gradual destruction of the flint tools would also have contributed to the density of sharp flints scattered over the working area. Periodic clearing of the flints would have been necessary for safety reasons. Near to the pyramid of Senusret I, Dieter Arnold30 found layers of builders’ debris containing granite dust, indicating that the material was worked there. There were no detectable traces of greenish discoloration from copper tools, but the large amounts of flint flakes suggest that flint tools were used for dressing the granite.

81. Extensive tests of diorite, dolerite, silicified, or crystalline, limestone tools, and of flint and chert chisels and punches34 show that only flint tools can truly cut into all igneous stones, particularly the coarsegrained variety, such as rose granite. The March 1999 experiments with some chert chisels and punches on the rose granite in a quarry at Aswan demonstrated that the tools were not quite hard enough to cut this stone.35.

82. The availability of large deposits of flint and chert as a resource for manufacturing sharp-edged tools ensured that Dynastic craftworkers were equipped to make most artifacts, even if metal tools were temporarily in short supply. Flint, as a manufacturing material, is cheaper to obtain than copper smelted from ore, but takes longer to shape into an individual tool than casting a similar tool in metal. For many millennia before the establishment of Egyptian civilization, and the introduction of copper tools, flint had been chipped into arrowheads and spear points for hunting, and into tools of many designs, which were used for the splitting, cutting, scraping, carving, sawing and boring of materials, such as plants, animal skins, ivory, wood and stone. The Predynastic craftworker employed flint tools to perforate hard, semi-precious stone beads, to shape hard and soft stone vessel exteriors and to hollow soft stone vessel interiors with flint or chert crescents.36 The concurrent use of comparably designed flint and metal tools in the Predynastic and Dynastic periods would not have been considered unusual, nor the substitution of flint tools in place of similarly designed, but unavailable, copper tools. In the Dynastic period, the carving of wood probably still involved the use of flint tools, particularly for removing the bark from newly cut stems. Flint tools continued in use for many other tasks, including the cutting of vegetable materials, such as those in use for rope-making, and linen and papyrus manufacture.

83. Chert nodules are also to be found in the limestone, and ancient craftworkers sometimes used them for making tools. For example, chert mauls and chisels were found at Eighteenth Dynasty Thebes by Howard Carter,40 the chert nodules probably coming from the Wadi Bairiya, opposite Armant, just south of Thebes. The tools used for roughly hacking out the limestone during tomb construction were made at the work sites, judging from the heaps of flakes found there. Chert has a light grey or a light brown colour and, although composed almost entirely of silica, breaks with a flat fracture, rather than with the shell-shaped depressions and elevations of fractured flint. The reconstructed chert tools were adequate for working most stones. However, the experiments with both the flint and the chert tools upon particular igneous stones demonstrated a critical disparity in hardness between them.

83. Although flint and chert knapping is a highly skilled art, and worth the investment of time to make tools only in use upon softer materials, the roughly made flint chisels and punches manufactured for use upon the granites and the diorite proved adequate for the experiments. The simplicity of sharpening a flint tool makes it attractive to a mason. Percussion of the stone, further back along the blade, causes a fresh, sharp edge to be created. The test use of such flint and chert tools upon the soft stones, for example limestone, produced little damage to the blades’ edges, and the rate of removal in soft limestone was considerable. No doubt, a chisel fashioned for use upon soft stone would retain its original form for a protracted period, and this is suggested by a skilfully made flint chisel found at the bottom of the pit containing Khufu’s boat at Giza.

84. Dynastic flint adzes, which were so effective for working the soft limestone, would not have been utilized upon the harder stones. These tools’ edges splinter and quickly become useless. Numerous experiments indicate that ancient flint adzes could only have been effective for working wood and soft stones, that is, soft limestone, soft sandstones, such as red sandstone, and gypsum. While the glancing blows of an adze were very effective on soft stone and wood, tests demonstrated that the hardness of calcite, and of harder stones, proved too much for this technique to be of any real use, and it is likely that flint chisels and punches, their cutting edges and points positioned vertically upon hard stone surfaces, were driven by a sudden blow delivered with a mallet or a stone hammer.

95. It has already been suggested that flint tools were used for working the limestone and granite at Giza in the Fourth Dynasty. With regard to the working of soft limestone into blocks, the employment of flint tools for the initial rough shaping makes sense. Why use expensively produced metal tools for this part of the operation when cheaply made, disposable stone tools are available? (It is not suggested that metal chisels were not in use for the final fitting work.) The experimental use of flint tools produced large numbers of microliths as they slowly disintegrated under each impact on the hard stone. Because of this, a search for undamaged ancient flint chisels and punches that were definitely used to shape hard stone sculpture, vessels and building components is unlikely to be successful. By their very nature, the flint tools would eventually fragment into smaller and smaller pieces and be incorporated into the general debris at the work sites.

96. During the long occupation of various parts of Egypt, before the advent of a unified state, flint was in use for many purposes, some of which were referred to earlier in this chapter. It was the necessity to carve hard stone vessels and statuary to shape (chisels and punches), and the hollowing of soft stone vessels (crescentic borers), that forced new uses for flint upon the ancient worker. The large-scale employment of stone for building and for statuary, and as a material for the carving of reliefs and hieroglyphs, necessitated a huge increase in flint tool production. Many of flint’s previous uses also remained in place. The test use of the flint tools demonstrated that this plentiful material possesses the characteristics of hardness, sharpness and toughness necessary successfully to work many different materials. For all these reasons, flint tools permeated the whole of Egyptian society at every level and throughout every period. Indeed, there had always been a flint for all seasons!