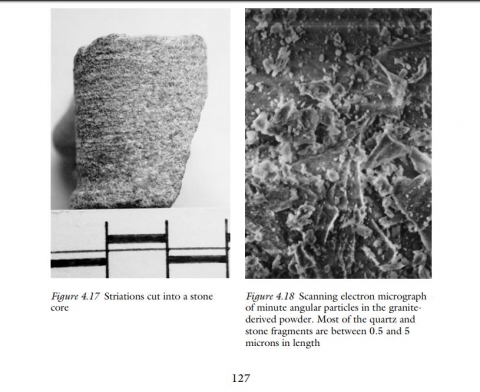 Experiments in Egyptian Archaeology: Stoneworking Technology in Ancient Egypt
106. On the back of the Fourth Dynasty basalt triad of Menkaure (CM JE46499), there are straight, horizontal, parallel striations, which look like saw marks. In this hard stone, these striations were caused by the side of a saw forcing a particulate abrasive substance against the walls of the slot as cutting progressed. Some of the striations are wider and deeper than others, and these can be explained by larger abrasive particles rubbing along particular striations. All of the saw marks seen on Egyptian stone artifacts display parallel striations that have an average depth and width of 0.25 mm. Although the saw is a reciprocating tool, the tubular drill can be thought of as part of a saw blade, but curved into a hollow cylinder.

124. After scoring the stone, worn and shattered particles cross under a drill-tube’s end-face and pack into the space between the top of the core and the bottom of the wooden drill-shaft, although some of the powder is trapped between the tube and the hole wall. A few large quartz crystals sometimes pass under the drill-tube’s end-face and are carried up into the tube with the fine powder. Likewise, large crystals are trapped on the outside of the tube, where the coarse sand is initially introduced. The gyratory actions of the bow-driven drill-tube force these crystals to cut striations into the core (Figure 4.17) and into the wall of the hole. Because the drill is spinning two or three revolutions clockwise, and then anticlockwise, these heavier crystals are swirled around in the powder. Naturally, they too, in their turn, are ground down to a powder. The reciprocating motion of a saw also forces larger particles suspended in the fine powder to score the side walls of the slot. The experimentally produced striations were similar to those seen in ancient stone artifacts.