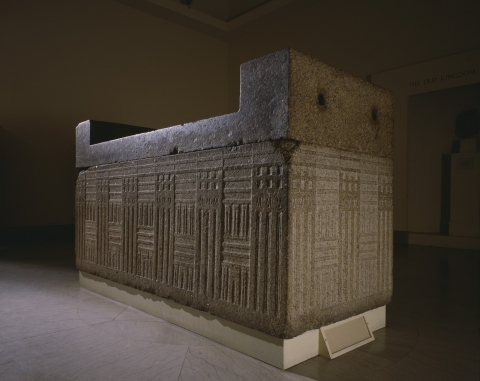 Experiments in Egyptian Archaeology: Stoneworking Technology in Ancient Egypt
107. Similarly, four tapered holes, drilled into the lid of the rose granite sarcophagus of Prince Akhet-Hotep (Brooklyn Museum of Art 48.110) possess these striations. Each hole is 31 cm long and tapers from a average maximum diameter of 5 cm to an average minimum diameter of 4.5 cm (see Figure 6.2). They were probably used to lift the lid with thick ropes.

128. It is clear from the drilling experiments that the random movement of the large sand crystals contained within the finely powdered sand, particularly in deep holes, gradually scrape striations into the stone. Striations seen in ancient artifacts were not immediately scraped to their full depths and widths by a single crystal. Striations are caused by many crystals over a period of time: in particular, striations in rose granite cross, without check, the interface between adjacent feldspar and quartz crystals in this stone. As a core and a hole wall are worn away by the gyration of the drill-tube, some existing striations are abraded away, but these are deepened again by new sand crystals. These striations generally run horizontally around a core and the hole’s wall, but some striations cross existing ones at various angles. The spriral striation, seen by Petrie on the granite core from Giza (see note 21), can be explained in this way. Gorelick and Gwinnett’s scanning electron micrographs (SEM)57 of the epoxy model made from a silicone impression of the bottom of one of the drill-holes in Prince Akhet-Hotep’s sarcophagus lid show that the concentric striations were not always regular and parallel. Some fade into adjacent lines, while others converge and diverge: they are rough in appearance. The present experiments demonstrate that the crystals in the dry sand do indeed produce concentric striations in granite cores, and in the holes’ walls, that are similar to the depths and the widths of ancient striations