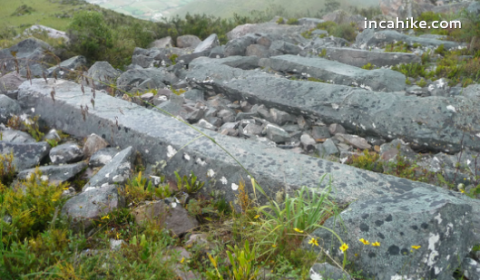 Inca Quarrying and Stonecutting - Jean-Pierre Protzen
At Kachiqhata, the Incas did not practice quarrying in the proper sense. The stone is neither eut off a rock face nor is it detached from bedrock by undercutting. The Inca quarrymen simply went through a giant rockfall carefully selecting blacks that met their specifications. As far as I can ascertain, once an appropriate block had been located, it was dressed only minimally before it was sent on its way to the construction site. The fine work and the adjustments for the final fitting appear to have been made later at the construction site. Often work was started on a block before the ramp to it had been finished.

As mentioned before, the rock at the West Quarry is of a grayish and finegrained granite. Very few large blocks abandoned on either the ramps or the construction site are of that material. Nevertheless, local lore maintains today, as it did in Squier's time, that this is in fact the real quarry of Ollantaytambo. Two millstones, one almost finished, the other roughly hewn, would indicate that the quarry was worked in colonial times. But other aspects, in particular the construction of the ramps, associate this quarry with the other two. The one surprising feature at the West Quarry are the many long thin blocks in various stages of production lying just off the main ramp. Sorne of these are almost 7 m. long, and have a cross section of only 40 x 40 cm. How these "needles" have been extracted remains something of a puzzle. From the way some "needles" are strewn about, it is evident that long blacks with large cross sections have been split repeatedly into blacks with ever smaller cross sections, but how?
There are no identifiable tool marks on the work pieces, no traces of wedge hales, nor any signs of channeling. The only thing I can assert with confidence is that these "needles" have not been pounded as the big blacks have in the North or South quarries.

4. At Rumiqolqa, in contrast to Kachiqhata, one encounters at all sites quarrying in the proper sense, the rock is broken off a face or extracted from pits.

5. The quarrying of this stone does not pose any major problems. Even the densest quality is still fractured enough so that it can easily be broken out of the face of the rock. To break it out, the Inca quarrymen may have used pry bars of bronze, of the kind exhibited in the museums in Cuzco and Lima, or they may have simply used wooden sticks, as I have observed contemporary quarrymen do.

5. Squier wrote about Rumiqolqa:
Of the manner in which the stones were separated from the natural rock there are here, as in other places, abundant illustrations. Excavations were made, where possible, under the masses of rock, so as to leave some portions of them impending. A groove was then eut in the upper surface on the line of desired fracture, in which oblong holes were worked to a considerable depth, precisely in the manner now practiced. The presumption is strong that wedges of dry wood were driven into these hales, and water turned into the groove. (Squier, 1877, p. 419)

Neither at Rumiqolqa nor at Kachiqhata did I encounter evidence conclusive enough to confirm the use of this technique by the Inca quarrymen. I found the only positive indications of such usage on a single block of red granite on the ramp up to the site of Ollantaytambo. A short channel, 145 cm. long, 4 cm. wide, and 2 cm. deep, traverses the top face of this block. In the channel are 3 ho les, from 10 to 13 cm. long, 4 cm. wide, 6 cm. deep, and from 32 to 34 cm. apart. Ten more such hales are to be found in the block, three of which are curiously staggered across the top face. The irregular shape of the hales, their rounded edges and bottoms, the sinuous tracing of the channel, and the pit marks in it strongly suggest that channel and holes were pounded out rather than eut with a chisel (fig. 11).

This example is in sharp contrast to the one split rock in the quarries at Machu Picchu, which features clean eut wedge holes, regular in shape and size, but no channel. There can be little doubt that these
holes were eut with a metal chisel (fig. 12). I am led to believe that the rock at Machu Picchu has been split in more recent times. The lack of traces of channeling and of the use of wedges does not, of course, rule out the application of this technique by the Inca quarrymen to mining stone or to breaking up large blocks. However, contrary to most accounts in the literature, it does suggest that the technique was not in common use.