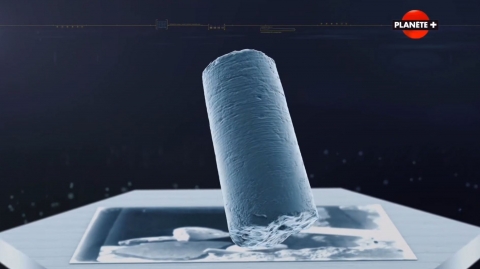 Experiments in Egyptian Archaeology: Stoneworking Technology in Ancient Egypt
107. W.M.F. Petrie17 and G.A. Reisner18 recorded that door pivot sockets in the Fourth Dynasty granite temples of Khafre and Menkaure had been created with tubular drills. Eye sockets and other parts of stone statuary were also drilled with tubes.19 Stone cores, which always indicate the use of a tubular drill, have been located by various archaeologists, particularly Petrie.20 Ancient holes in stone, and upon stone cores, have concentric striations around their circumferences, which are horizontal to the holes’ and the cores’ vertical axes (e.g. UC 18071, a calcite vase in the Petrie Collection), and these striations are, like the saw-slot striations, an average of 0.25 mm wide and deep. In particular, a tapered red granite core Petrie found at Giza (UC 16036) has a continuous striation which spirals for several rotations around its circumference. Petrie noticed that the striations cut through the softer feldspar and the harder quartz crystals in the granite without any variation in depth.21 He rejected a loose cutting powder and thought this was good evidence to indicate the use of jewelled teeth, which were set into copper tubes as well as into copper saw blades.22

128. It is clear from the drilling experiments that the random movement of the large sand crystals contained within the finely powdered sand, particularly in deep holes, gradually scrape striations into the stone. Striations seen in ancient artifacts were not immediately scraped to their full depths and widths by a single crystal. Striations are caused by many crystals over a period of time: in particular, striations in rose granite cross, without check, the interface between adjacent feldspar and quartz crystals in this stone. As a core and a hole wall are worn away by the gyration of the drill-tube, some existing striations are abraded away, but these are deepened again by new sand crystals. These striations generally run horizontally around a core and the hole’s wall, but some striations cross existing ones at various angles. The spriral striation, seen by Petrie on the granite core from Giza (see note 21), can be explained in this way. Gorelick and Gwinnett’s scanning electron micrographs (SEM)57 of the epoxy model made from a silicone impression of the bottom of one of the drill-holes in Prince Akhet-Hotep’s sarcophagus lid show that the concentric striations were not always regular and parallel. Some fade into adjacent lines, while others converge and diverge: they are rough in appearance. The present experiments demonstrate that the crystals in the dry sand do indeed produce concentric striations in granite cores, and in the holes’ walls, that are similar to the depths and the widths of ancient striations.

The pyramids and temples of Gizeh
174. On the granite core, broken from a drill-hole (No. 7), other features appear, which also can only be explained by the use of fixed jewel points. Firstly, the grooves which run around it form a regular spiral, with no more interruption or wavlness than is necessarily produced by the variations in the component crystals ; this spiral is truly symmetrical with the axis of the core. In one part a groove can be traced, with scarcely an interruption, for a length of four turns. Secondly, the grooves are as deep in the quartz as in the adjacent felspar, and even rather deeper. If these were in any way produced by loose powder, they would be shallower in the harder substance—quartz ; whereas a fixed jewel point would be compelled to plough to the same depth in all the components ; and further, inasmuch as the quartz stands out slightly beyond the felspar (owing to the latter being worn by general rubbing), the groove was thus left even less in depth on the felspar than on the quartz. Thus, even if specimens with similarly deep grooves could be produced by a loose powder, the special features of this core would still show that fixed cutting points were the means here employed.

175. 131. Next the Egyptians adapted their sawing principle into a circular, instead of a rectilinear form, curving the blade round into a tube, wich drilled out a circular groove by its rotation ; thus, by breaking away the cores left in the middle of such grooves, they were able to hollow out large holes with a minimum of labour. These tubular drills vary from 1/4 inch to 5 inches diameter, and from 1/30 to 1/5 inch thick. The smallest hole yet found in granite is 2 inches diameter, all the lesser holes being in limestone or alabaster, which was probably worked merely with tube and sand. A peculiar feature of these cores is that they are always tapered, and the holes are always enlarged towards the top. In the soft stones cut merely with loose powder, such a result would naturally be produced simply by the dead weight on the drill head, which forced it into the stone, not being truly balanced, and so always pulling the drill over to one side ; as it rotated this would grind off material from both the core and the hole. But in the granite core. No. 7, such an explanation is insumdent, since the deep cutting grooves are scored out quite as strongly in the tapered end as elsewhere ; and if the taper was merely produced by rubbing of powder, they would have been polished away, and certainly could not be equally deep in quartz as in felspar.

177. 133. The great pressure needed to force the drills and saws so rapidly through the hard stones is very surprising ; probably a load of at least a ton or two was placed on the 4-inch drills cutting in granite. On the granite core, No. 7, the spiral of the cut sinks "0.1 inch in the circumference of 6 inches, or 1 in 60, a rate of ploughing out of the quartz and felspar which is astonishing. Yet these grooves cannot be due to the mere scratching produced in withdrawing the drill as has been suggested, since there would be about 1/10 inch thick of dust between the drill and the core at that part ; thus there could be scarcely any pressure applied sideways, and the point of contact of the drill and granite could not travel around the granite however the drill might be turned about. Hence these rapid spiral grooves cannot be ascribed to anything but the descent of the drill into the granite under enormous pressure ; unless, indeed, we suppose a separate rymering tool to have been employed alternately with the drill for enlarging the groove, for which there is no adequate evidence.